How To Master Futures Pricing

How To Master Futures Pricing
and Pass The Series 3 Exam

A big key to answering many questions correctly on the series 3 exam will be to know how futures contracts are priced. . This article, which was produced from material contained in our series 3 textbook, will help you master the material so that you pass the series 3 exam.

How Are Futures Contracts Priced ?

Each commodities futures contract has specific pricing characteristics that are set by the exchange and designed to reflect the needs of the market participants who use the commodity. The amount of the underlying commodity covered in a futures contract, the pricing increments, and the expiration months traded are all established with the production and use of the commodity in mind.

Each commodities futures contract represents a stated amount of the under- lying commodity and is priced in increments that reflect the price per unit of the underlying commodity. For example, a corn contract represents 5,000 bushels of corn and is priced in cents per bushel. Alternatively a gold futures contract that covers 100 troy ounces of gold is priced in dollars and cents per troy ounce. One troy ounce is equal to 1.09714 ounces. The exchange on which the futures contract trades also sets the minimum price variation for the contract, known as a tick. The value of each tick per contract is based upon the pricing of the contract and upon the number of units of the underlying commodity covered by the contract. For the corn and gold contracts above the pricing and value of the tick would be as follows: Corn tick = ¼ of 1 cent per bushel $0.0025 5,000 bushels $12.50 per contract Gold tick 10 cents per troy ounce = $.10 100 troy ounces $10 per contract In addition to setting the minimum price variation per contract, the exchange also sets a maximum amount by which the value of the contract may change during a trading session. This is known as limit up—limit down or the daily price limit. Most contracts have a stated amount by which the contract can raise or fall from the previous day’s settlement price. However the current or spot month is usually not subject to a daily price limit. The limit up and limit down rule is designed to keep the market for the underlying commodity stable and to avoid panics. Most contracts have initial limits that can be expanded during times of heightened volatility at the discretion of the exchange. Should three or more contract delivery months close limit up or limit down for a given commodity, the Chicago Board of Trade (CBOT) may expand the daily price limit to 150% of the standard daily price limit. These expanded daily price limits will remain in effect for three consecutive trading days. If the daily price limit is increased for a given commodity due to extreme volatility in order to protect the clearinghouse, com- modity merchants, and customers, the CBOT will automatically increase the minimum margin required to hold those contracts to 150% of the original minimum. The Chicago Mercantile Exchange (CME) does not automatically increase the margin requirement when the daily price limit expands. The daily price limits for a given commodity contract are established by the board of directors at the exchange where the futures contract trades. All daily price limits set by the exchange are subject to review and approval of the Commodity Futures Trading Commission (CFTC).

Futures contracts also trade on short?term U.S. Government obligations. The futures contract covering the three month T- Bill is the most active contract. The U.S. T-bill contractcovers$1,000,000 par value and is priced based upon an index as a discounted percentage from par. The price of the contract is determined by subtracting the interest rate from 100. If interest rates in the marketplace are currently at 3.25%, the price of the contract would be determined as follows:

The development of futures contracts for the major stock indexes has evolved into one of the most liquid futures markets. Futures contracts for the S&P 500 index, often referred to simply as S&Ps, are the premier contract. This highly liquid market allows investors to gain exposure to a broad basket of stocks representative of the overall market by simply placing an order to buy or sell S&P 500 futures contracts. The contract value of the S&P 500 is $250 times the contract price. If the S&P 500 contract is trading at 1625, the total contract value is $250 1625 $406,250. One S&P point is worth $250. The contracts trade in minimum increments of $.10, with each tick worth $25. An investor who thinks that the overall market will advance may purchase S&P 500 contracts to gain exposure to the overall market in an attempt to profit from this belief. An investor who believes that the S&P 500 would advance from 1625 to 1700 enters the following order:

The value of S&P futures contracts is based on an index value, which is calculated based on the price of the 500 stocks contained in the S&P 500 index. The S&P 500 contract settles in cash and not with the delivery of shares of the 500 companies. During the delivery month, a person who is long the S&P 500 futures contract will have their account credited, while a person who is short the S&P 500 contract will have their account debited. The difference between the price where the futures position was opened and where the contract expired will determine if the investor has made or lost money

See our most Popular Series 3 Products Below 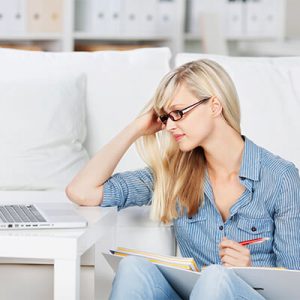 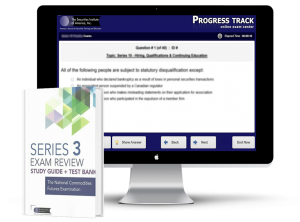 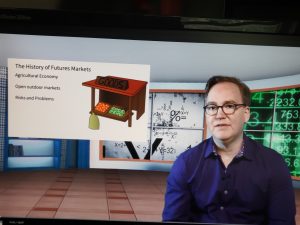 Get Videos and Exam Prep Software : 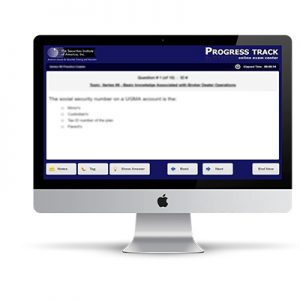 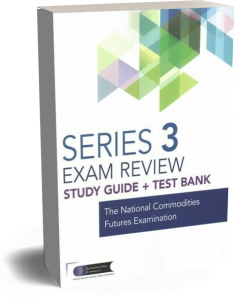